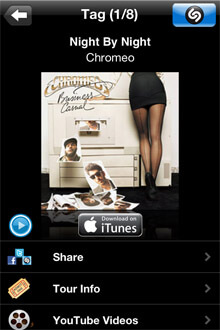 The UK based music identification company Shazam has announced that the 54th Annual Grammy Awards on February 12 will be Shazamable, meaning that viewers of the show will be able to use their smartphone application during the entire event to receive exclusive content such as behind-the-scenes and artist information. This, after successfully allowing the same live-broadcast features during the Super Bowl XLVI 2012 event, which allowed the users to receive engaging content in real-time during the entire football game and also during nearly half of the advertisements.

The social experience with Shazam for the Grammy Awards will be in the form of images from the red carpet as well as artist integration to purchase their songs and receiving intuitive content related to their music videos, tour dates and other relevant content that the application supports. Shazam has been featured on several TV shows and advertisements (Old Navy being one of them). Similar song discovery applications such as Soundhound, Gracenote, Midomi and SoundTracking have been around on both Apple iOS and Google’s Android platform, although most of the applications lacking the vast audio fingerprint database that Shazam is accessing to identify songs. Midomi is a competing app with the advantage of analyzing a person’s voice (humming or whistling) and returning a song that is closest to the user’s voice, also known as the input query.

Shazam currently has 175 million users in 200 countries, and has gone through several iterations of their application, with social features for publicizing your analyzed content to Facebook and Twitter, while reenacting the experience with YouTube videos and artist recommendations based on your audio search query. A close relationship is kept to the iTunes ecosystem, and most recently they added Spotify as another way for music discovery from within their application. These features collectively help selling 350,000 songs daily, based on 6 million song identifications through their app. That means every 17th input query leads to a purchase, which make them a prominent Apple affiliate, if not the number one.

Worth mentioning is that everybody that makes a search query (also known as tagging) on Shazam from now until March 15, will be entered into a contest to win a VIP trip for two to next year’s 55th Grammy Awards. Visit their website for more details.