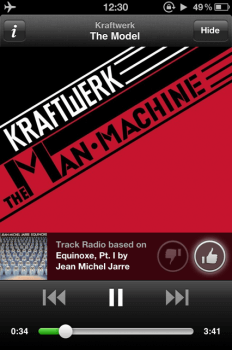 Better late than never.  Swedish music streaming service Spotify has updated its iOS app with a new feature that allow users to generate and build radio stations by using artists, songs, albums or simply the playlists provided by Spotify (more than 28 genres and lists). In the past, only paying Premium users were able to play music in the mobile app, hence the Radio feature will allow unlimited streaming for non-paying users.

And as most Radio-esque streaming applications, you will only be limited to a certain number of song skips which cope with the Digital Millennium Copyright Act (DMCA) and the guidelines for limitations on free music streaming. The app will therefor limit freemium users to 6 (six) song skips per hour while Premium customers get unlimited skips. Wouldn’t be fair to limit the loyal customers, would it.

It is for now only available on iOS, and Android should hopefully be expecting to see the update soon enough. The feature only works in US for non-paying users, although Premium users outside of the United States will also be able to use the feature. The only difference would be the advertisements that abruptly hinder the listening, but it’s still worth it if you’re not spending the $9.99/month. And if you choose to do so, offline mode will be available as well as ad-free listening.

You will be able to thumbs up and thumbs down each individual song that is playing in the “radio station” that was created. Any ‘thumbs up’ will consequently add the song to a new music playlist (non-radio) called Liked from Radio which feature all your “liked” songs. I noticed the new playlist on my desktop app, although it was synchronized to the mobile app as well. Interestingly, the thumb rating algorithm which is based on a technology from Echo Nest only applies to the current playlist that it was rated within. Such feature will limit the creation of an overall rating profile for your account, unlike other music streaming services which will collect and analyze your ratings into one definite profile. Spotify’s approach is actually really good. Especially if you’re sharing your account with other family members or friends; each person will be able to create their own playlist style with the thumb rating for their personal radio stations, yet limiting Spotify algorithms to only operate within the playlist, much like a collateral music sandbox. In other words, whatever you like and dislike (thumbs up and thumbs down) will result in a customization for that specific radio station only.

I am not sure whether the rating algorithm is as advanced and accurate as Pandora’s more straightforward approach, but time will tell. The main difference is the human interaction that takes place through the Pandora application, whereas Spotify to a great extent relies on the social graph to change the song picks in the radio. As of date, there is no rating system in the native desktop application (version 0.8.3.222). It would be safe to say that we are due to see a similar rating feature within the desktop application also. Spotify is slowly rolling out the Echo Nest integration in the Mobile Radio and Artist Radio which means that the user thumb analysis will get better as time goes. ‘Echo Nestified’ songs will show up with an Echo Nest logo next to the artist artwork up to four seconds before it disappears.