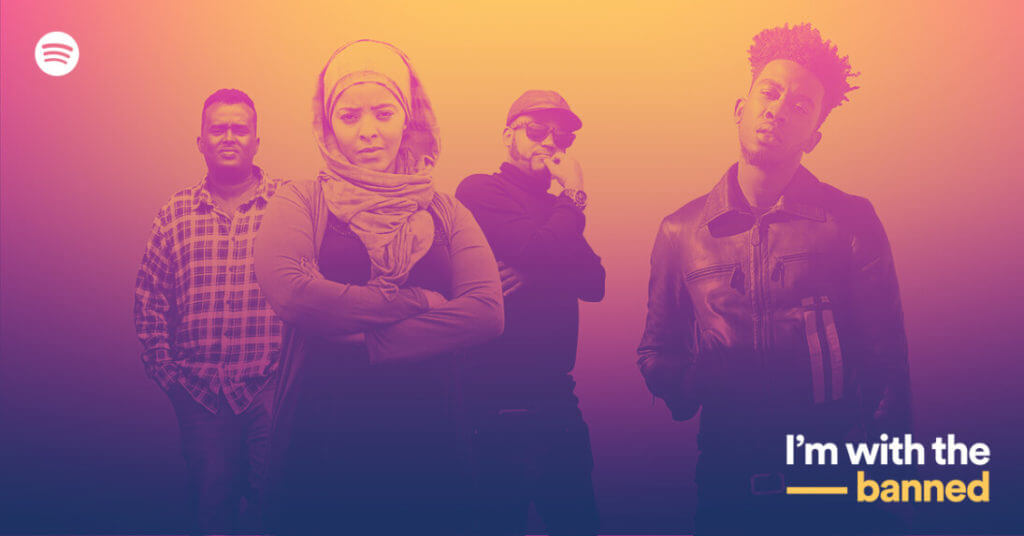 A few days ago, while listening to music on Spotify, I came across an interesting playlist collection that was created and published by Spotify themselves. The title was “I’m with the banned” with the subtitle “When people can’t travel, music will”. This completely caught my attention.

After quickly scrolling through the artists and tracks in those playlists, I noticed one notable name. Ahmed Fakroun. One of the best raï singers that completely reinvented the scene by incorporating rock with his mastery of both oriental and western instruments. With such connotative title on the playlist, I instantly jumped on his playlist to listen to his track “Salam”, featuring the jazz organist Dr. Lonnie Smith.

20 seconds into the song, and I knew such a big deal this song is. So beautiful.

Mr. Fakroun being of Libyan nationality, is one of the targeted groups that are affected by the recent U.S. travel bans. Spotify has not only initiated this movement, but also empowered multiple artist from the affected countries and allowed open collaborations across international borders, welcoming alternative content that touches topics such as immigration and LGBTQ equality.

This movement is such a big deal, not just from a social awareness point of view, but also musically, an absolutely significant step toward testament of music being one of the everlasting mediums to connect people regardless of nationality or ethnicity. It is inevitable that all humans are in pursuit of happiness and a safe environment to nourish and live a prosperous life. And it’s great to see a company acting positively to raise awareness for a cause even though it could be considered being of minuscule proportions.

If politics is the inherited source of world problems, then music certainly will be a first step to amplify the voices of people. It has always been this way. And Spotify just made their stance on this issue.

On July 6, this installment will debut on Spotify with a series of enhanced playlists which will feature new music and original video content highlighting six artists from Syria, Sudan, Somalia, Libya, Yemen and Iran; the countries incorporated in the proposed travel ban. These international artists collaborated with American artists with whom they share the love of music.

Kasra V – DJ and record producer hailing from Iran and specializing in techno/deep house, he hosts a bi-weekly radio show on NTS Radio and is a curator of the Dance playlist for 22Tracks

Moh Flow – Singer/songwriter from Syria who co-produces with his brother, AY. While residing in Dubai and traveling the world, the 25-year-old has had the chance to harness his music making skills to release music consistently over the Internet.

Waayaha Cusub – A Somali musical collective that organized the first international music festival in Somalia’s capital since the start of the civil war in the early 90s.

Ahmed Fakroun – Singer/songwriter and multi-instrumentalist from Libya and pioneer of modern Arabic Music, influenced by Europop and French art rock.